“I remember almost everything from that period; rehearsals, show, backstage, tours, conversations…but specially the sound we had playing live! Those were definitely the loudest shows I’ve ever played.” 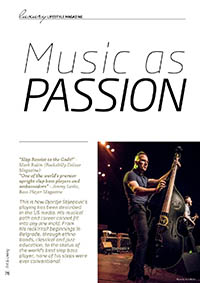 Djordje Stijepovic’s musical path and career cannot fit into anyone mold. From his rock’n’roll beginnings in Belgrade, through ethno bands, classical and jazz education, to the status of the world’s best slap bass player, none of his steps were ever conventional.

“If I play a solo, there are no rules. I could play a few notes or lots of them. No slap or lots of slap. I still try to make it as musical as possible and I largely rely on inspiration of the moment.” 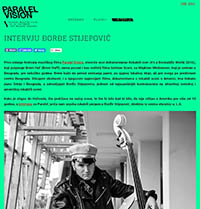 “I’m a fighter by nature. I can create opportunities where there are none. I don’t give up, even when people tell me I don’t have a chance to succeed. I still believe in dreams.”

“Being in the rock’n’roll world practically my whole life, I cannot see myself copying others, even my musical heroes. Individuality is really important for me in everything I do.” 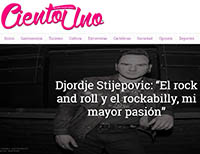 “It’s hard to explain or define my music style in words. I would say that my style is to play with great musicians and to play music that I love, from jazz, to classical or rockabilly.” 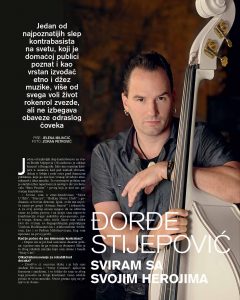 Playing with my Heroes by Jelena Milincic

“When you decide to get into music, especially rock’n’roll, you pretty much decide to be forever young and to avoid grownups obligations. I still fulfill mine, but I live the way I want to live.”

“I’m an entertainer by nature. I love live music and the interaction between musicians and the audience. That is one of the reasons why I still play music.” 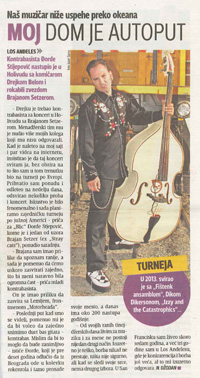 My Home is on a Highway by Neven Dzodan

“Since my early teenage days I’ve been living for music and for me this is the only way. It’s extremely hard, the struggle never stops, nothing is guaranteed, but when you follow your heart, there’s no other option!” 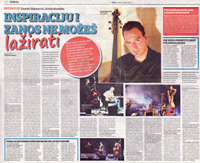 “I would be a little bored if played just one type of music. I like to combine it, mix it up, add something new, learn something old… Tradition is very important to me and everything I play is strongly grounded in traditional styles.”

“Classical musicians have a great knowledge of music theory that they use for the analysis of already written compositions, but not for improvisation or creating new compositions (except for composers, of course). I’d love it if the classical and jazz worlds were more connected.” 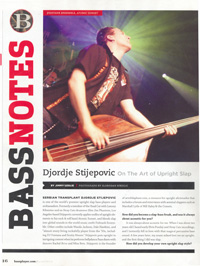 Djordje Stijepovic On The Art of Upright Slap by Jimmy Leslie

“I often use licks I learned from Romanian Gypsy music when I play rockabilly, or throw in some New Orleans jazz licks when I play Balkan music. I do it all with a punk edge!”

“Upright slap has evolved a lot in the recent years. It’s become a complex, advanced technique. I’m still learning and constantly working on improving my style.” 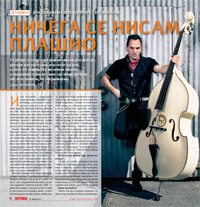 I Wasn’t Scared of Anything by Srdjan Jokanovic

In Serbia, jazz musicians considered him a rocker and rockers saw him as a classical musician. After he graduated from the conservatory, he went somewhere he could be whatever he wanted, without limits.

“My idea of a good bassist is that he has to be primarily a support for the soloist, providing a steady groove and energy. Slap bass is something that can make you stand out, but the crucial part is to be a part of the band and a real team player.” 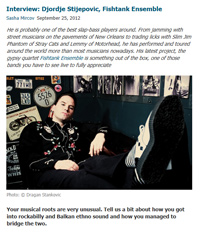 “I remember that most kids back then were into some watered down MTV rap. In Serbia this period was also the start of the Frankenstein-like product called turbo folk. Either way everything was so overproduced that it was totally tasteless. I needed that bite that I could find only in rock’n’roll music.”

“We’re not trying to copy anyone and, because of that, it’s hard to pigeon-hole the band into any music genre.”

“I don’t think there’s a right way and a wrong way in music. Our goal is to enjoy playing music we love and to make people happy. As long we see smiling faces of the dancers at our shows, we know we’re doing something right.” 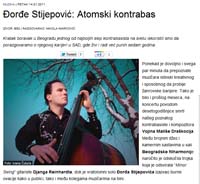 “I was in fifth grade when I first had a desire to move to US. I wanted to go with my rockabilly band Lonesome Train and visit the place where rock’n’roll was born. That was my pre-teen dream that I finally fulfilled in January 2004.”

“In the beginning I was going to shows and almost every time after they were done I would ask the bass player to let me play a little bit, just to feel the instrument (since I didn’t have one at the time). They would usually let me play and that was how I got in touch with musicians. I literally knocked on every single door. Little by little, people heard there was a new bassist in town.”

“I don’t want to stress myself with stuff that I cannot change which is probably the main reason why I don’t own a TV. Although I always choose to be well informed, I’m very picky about the news sources.”

“Money was never my motive nor goal. In the last 3-4 years I traveled through more than 40 US states, half of Europe and played with many of my teenage heroes whose posters I still have on the walls at my place in Belgrade. I don’t know if there’s any other profession that could fulfill all that?!”

“I always have at least one one-way ticket in my pocket and it’s always a different destination.”

“When I was 10 years old I heard Tonny Montano for the first time; went to the Devils’s concert (Tonny Montano and Devils (Djavoli) were 1950’s inspired bands from Yugoslavia); went crazy for the movie Wanderers; figured out that the 1950’s Elvis was way more cool than the current popular music; and –what was most important, I heard the first Stray Cats album!”

“Since I spend most of my time touring US, my home is probably somewhere on the hwy 70…”

“Sometimes I really cannot help not to think about being in the same car with Lemmy while Slim Jim is driving. Their posters are still on the walls in my apartment in Belgrade!”

“Life in the States has definitely changed me, but it hasn’t pulled me away from Belgrade and my friends. Besides music, the main reason to came to California was to have another perspective, not just the one that I was exposed to and to which I traditionally belong.”

“We (Marsya) were very open to research, so the percussionist and I played a fully improvised number Byzantine Circle – some kind of ethnic drum’n’bass.”

“I know that not many people can handle being far away from home for such a long time, constantly on the road in the van. This job is not for everyone. Whoever decides to go this way, I wish him all the best and enough strength not to give up.” 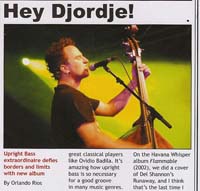 “I fell in love with the rawness of Bill Black’s slap bass on the Sun Sessions and to this day it still attracts me.”

“The only thing that matters to me is music. If it’s good, it’s good. It doesn’t have to fit into any particular genre.” 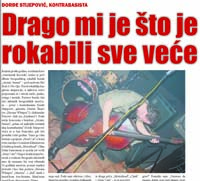 “I enrolled in the classical music school when I was 13. At that time I was not interested in classical music at all, but that was the only way to convince my parents to buy me a double bass.”

“I never forgot the reason why I started playing music…and that’s rock’n’roll!” 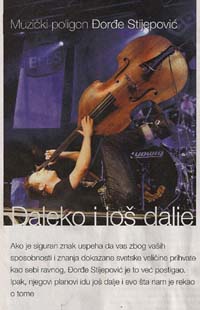 Far and Beyond by Milos Ristic

“The Stray Cats and Motorhead have been my favorite bands for a long time, so it was very easy for me to play with Lemmy and Slim Jim. It was also a great honor. After our first rehearsal, Slim Jim told me we had a good groove. I thought at that moment: Of course, I’ve been listening to your records on a daily basis for 15 years!” 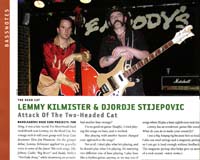 “The way Lemmy plays, gives us a huge sound, especially when I play slap bass. With two bass players, you have to watch out for clashing notes so I play more basic lines.” 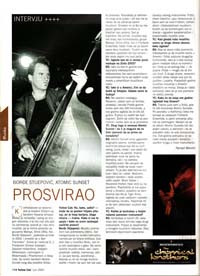 “It seems that I always choose the least commercial music. For me, the most important thing is to be satisfied with the sound I create.”

“Since I have classical and jazz education and I played a lot of rock’n’roll, Balkan and Middle Eastern music, I try to combine all that knowledge and create unique and recognizable musical expression.”

“The knowledge I got there (classical and jazz conservatory) really helped me understand music theory and music in general. I also had the luck to learn from some of the greatest bassists in the world at various workshops.”

“I know that steel strings are nowadays almost a “bad word” in rockabilly, but I like that, with them, you have much better control of the intonation than with the others.”

“I believe that the sound is in the fingers, rather than strings, pickups and amps.”

“I try to keep my ears open for new sounds all the time.” 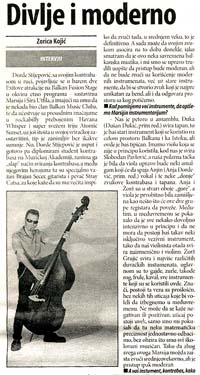 Wild and Contemporary by Zorica Kojic

“We (Marsya) tried to kick out that mathematical precision, even though all of us were classically trained.”

“In the meantime, I created my own way of playing folklore and ethnic music. Somehow, all the music styles that I liked, got together, so I perceive music as one. I refuse to divide it.” 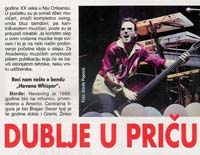 Deeper into the Story by Milos Ristic

“With double bass, you’re directly influencing the sound. You don’t depend on amplifiers and different  processors. Your fingers are conveying your emotions and that’s what presents your soul. Bass is one of the wildest instruments. When you slap it, that’s really something else.”

“I see music as one. People that were creating it were not focused on the style and following any rules. The rules were made up after a certain style was already gone. I don’t have to play all music genres. Music is one and that’s the only relevant approach for me.” 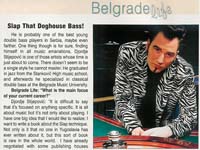 “It is difficult to say that my career is focused on anything specific. It is all about music, but it’s not only about playing.” 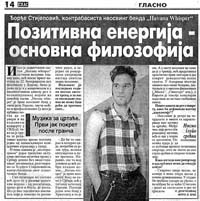 “In order to play neo swing here in the Balkans, you need to invest a lot of effort, great enthusiasm and a lot of time. But first of all, you have to play jazz very well, of course…”